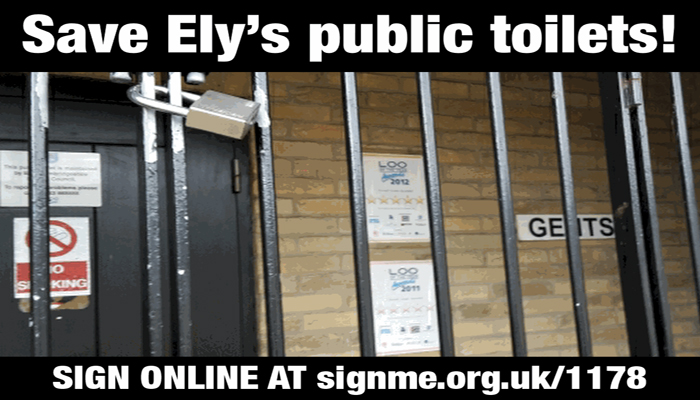 Three councillors including both the Liberal Democrat Councillors, have ‘called in’ East Cambridgeshire District Council’s decision to close the public toilets at Newnham Street and Sacrists Gate. This means that the decision will be reviewed by the full council at its next meeting, on 13 April.

Two of Ely’s six public toilets are set to close, and Barton Road will be kept open for a further year, following an agreement by City of Ely Council to give £8,000 towards their running costs – to be taken from Community Infrastructure Levy (CIL) payable by the developers of the cinema.

The two public toilets facing the axe are Newnham Street, and Sacrists Gate – leaving only Palace Green, Ship Lane, and The Cloisters. Of the three remaining sets of toilets, one (Palace Green) has no disabled facilities, while all three toilets to be closed are accessible to people with disabilities.

Despite strong representations from the local Access Group about the negative impact the closures will have on many people and a 500+ name petition, the Council voted to close the toilets,

The closures will leave those with additional needs only two public toilets – the busy Cloisters, and Ship Lane down by the waterside.