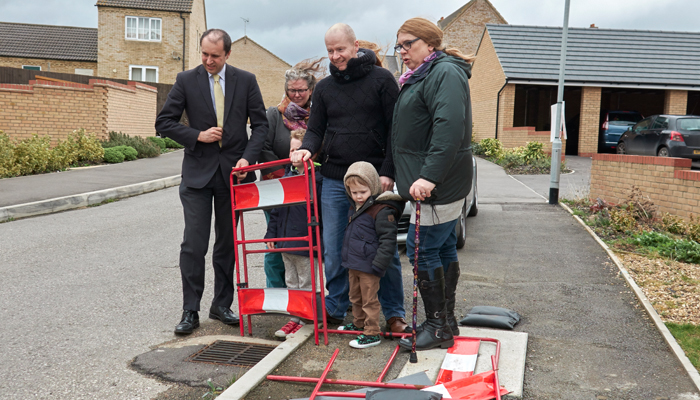 Years have passed since Barratt Homes left the Cathedral View development in Ely, but they left without completing the work and broken sewers added to this to prevent the roads being adopted despite Kings Avenue being a major route for HGVs.

So we contacted Barratt Homes to request that they resolve the problems – and we also wrote 500 street letters and contacted the media. Very quickly we started receiving emails from people who also contacted Barratt following our letter and others thanking us for my efforts.

“We have identified a fault on a length of sewer that requires repair before the drainage system can be adopted by Anglian Water.  Our Contractors have been reviewing the best method to undertake the repair whilst minimising disruption to this busy route.  Proposals have been received and we will be instructing the works very shortly with the hope of commencing works within 3 weeks.

Once the sewer repairs are complete to Anglian Water’s satisfaction, we will focus on the County Council’s remedial requirements.  Completion of these works will enable us to request a Provisional Certificate from the County following which, Barratt Homes will remain responsible for the maintenance of the works for a further 12 months.

I can advise that remedial works are due to commence very shortly on the Prickwillow Road/Kings Avenue roundabout, which will secure its adoption under the S106 Agreement.”

Not satisfied with the response, I asked Barratt to be a little more helpful with dates for completing all the work and soon received a further response:

“I have requested my engineering department priorities this development and complete the roads and footpath within Carey Close ASAP, followed by all road and drainage remedial works on the whole estate to be completed by the end of June at the latest.”

But better news was to come as we found out that rectification work is underway.  Hopefully Barratt Homes will keep their promises.

We can achieve amazing things if we work together.

We will always stand up for the people of Ely.